Find this article at:
go.ncsu.edu/readext?656500
— Written By Bryan Konsler 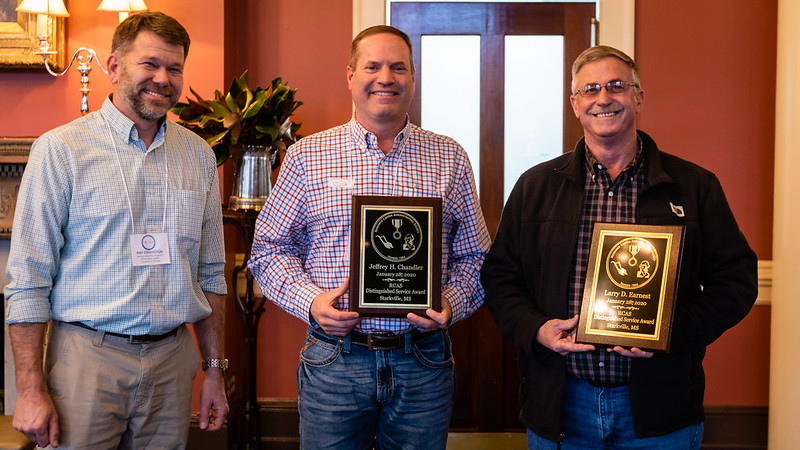 RCAS Past President Jeff Chandler, Director of the Mountain Horticultural Crops Research and Extension Center for NC State University, and Larry Earnest, director of the Rohwer Research Station for the University of Arkansas System Division of Agriculture, were honored Jan. 28.

“These two gentlemen are pillars of the RCAS organization, providing leadership as officers and committee members while also being state hosts to the organization,” said Ray Covington, society president and director of the Georgia Mountain Research and Education Center for the University of Georgia Extension. “As ambassadors for the RCAS organization and consummate professionals in their respective area, all of us with RCAS acknowledge their gift of service and are proud that they received this prestigious award.”

Chandler earned a BS in animal science and master’s in crop science from North Carolina State. He served nearly five years for NC State Extension as an agent in Polk, then Wayne counties. He was named assistant superintendent of the Cherry Research farm in 1999. In 2003, he was named superintendent of the Sandhill Research Station before being named to his current post in 2012 as Director of the Mountain Horticultural Crops Research and Extension Center. Chandler served as President of RCAS 2017-2018.

“I am honored and humbled to be recognized by my peers with a Distinguished Service Award from RCAS,” he said. “I was totally surprised to receive this award!”

“This organization has tremendous value for improving research station operations around the country,” Chandler said. “It is the only professional organization I am aware of that deals specifically with the innovative and efficient operation of research stations. Further, the membership of RCAS is a tremendous group of people that I have had the privilege to develop relationships with over the years.”